A naked fisherman was plucked from shark-infested waters off the coast of Australia on Thursday after a capsized boat left him and two others lost at sea for more than 24 hours. Watch the video here.

"When we first spotted him, one of the scariest things was there was a massive hammerhead shark not 20 meters away from him, just slowly circling around him," Grant Taylor, a Channel 7 reporter who was in the chopper, said during a live relay of the dramatic save. 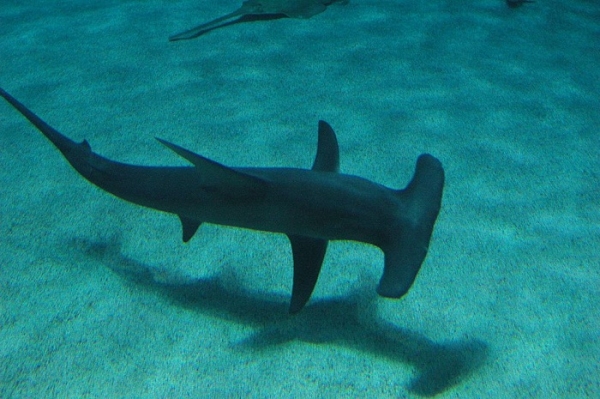 "He's stark naked ... just struggling to swim and float on his back and try and keep his head out of the water," Taylor said. "He keeps waving at our chopper trying to get us to come down and help him but there's nothing we can actually do."

NBC The man was first spotted by a Channel 7 news chopper on Thursday morning. Hammerhead sharks circled the man as he floated on his back in the water.

Rescuers boats arrived at the scene and tossed the man an inflatable raft, but the man was too exhausted to swim to it.

"He just keeps putting his hands together praying, but he doesn't realize there's a boat just right behind him as we speak right now," Taylor said.

"Come on, mate, just turn around and have a look, you're saved. He's yelling 'Help.'"

A hammerhead shark swimming near the stricken fisherman.

A rescue boat eventually hoisted the 49-year-old out of the water.

After being taken ashore, he was flown to a hospital in Perth, where he was treated for hypothermia.

It wasn’t clear how the man lost his clothes.

Grant Taylor, a Channel 7 reporter who was in the chopper, said the man waved to them for help 'but there's nothing we can actually do.'

A 23-year-old man was also rescued, but died after being taken ashore, Australia's Telegraph newspaper reported.

A third man who was also aboard the boat has not been found.

The man who survived was not identified but is said to be an uncle of one of the other two men.

Update:  A rescue boat eventually hoisted the man aboard. He was taken ashore and then flown to a hospital in Perth, where he was treated for hypothermia.

Authorities said the three set out in a fishing boat from Leeman, some 170 miles north of Perth, on Wednesday, the Telegraph reported.

The rescue operation covered some 125 square miles of ocean before the men were found.

Update:  The survivor was said to the uncle of one of the two other men he was fishing with, both 23. One man was rescued but died after being brought ashore, while the third man has not been found.