Greenpeace climbers and divers have successfully stopped one of the world's largest and most destructive super trawlers from leaving its berth in the Dutch port of Ijmuiden, en route to Australia.

At 3am, activists put a chain around the ship’s propeller and two climbers are currently hanging on the cables between the ship and the quay, to prevent the ship from beginning its journey to Tasmania. If approved, the super trawler will begin fishing in Australian waters as early as August, under a partnership between Seafish Tasmania and a massive Dutch fishing operation.

“Where ever this ship has gone it has destroyed fish stocks and ruined fishermen’s livelihoods. Along with a broad cross-section of the community that has declared the Margiris unwelcome, we will be ramping up efforts to stop it doing the same in Australian waters” said Nathaniel Pelle, Greenpeace Oceans Campaigner. 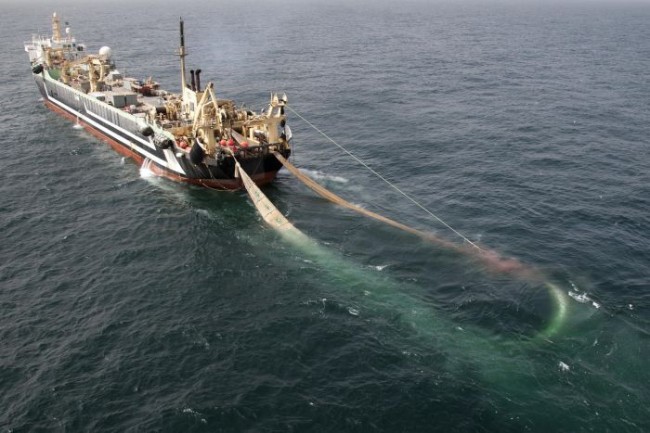 Last week at The United Nations (UN) Conference on Sustainable Development – Rio +20 – Australia reaffirmed its commitment to reducing fishing subsidies and overcapacity as per the UN Responsible Fisheries Code of Conduct.

“If the Australian government allows the Margiris to come and fish in Australian waters, after plundering oceans elsewhere, it makes a mockery of that commitment” said Pelle. “The Margiris is bad news for Australia and globally irresponsible. The only reason this sort of super trawler is economical at all is because of EU taxpayer subsidies.  With the EU failing to reduce its overblown fishing fleet, offering this vessel yet another fishing ground to plunder simply perpetuates an unsustainable fishing industry.”

The FV Margiris is linked to the European Pelagic Freezer-Trawler Association (PFA), an EU taxpayer-subsidised fleet with a history of leaving overexploited fisheries and out-of-work fishermen in its wake.

“The only beneficiaries would be Seafish and the bloated PFA fleet that is too often allowed to move from one fishery to another leaving behind empty seas and jobless fishermen,” said Pelle.

A UN FAO report in 1998 concluded the global fishing fleet was 2.5 times larger than global fisheries could sustain and the fleet has swollen further since, meaning dramatic cuts are needed to ensure productive fisheries into the future.

Greenpeace took direct action against the FV Margiris earlier this year off the West African coast, where almost all the species targeted by foreign trawlers are now fully exploited or overexploited. Prior to that the vessel was fishing in occupied Western Sahara under a deal that EU legal advisors labelled “disgraceful” and a violation of international laws.

“The obscene irony of this arrangement is that Seafish will export its catch right back to Africa where their ability to catch fish for themselves has been taken away by ships like the Margiris.”

“Fishing capacity must be cut by more than half and boats like Margiris should be scrapped first. We need to draw a line in the sand and decide which vessels are allowed to ply our ocean for fish. If it robs ordinary fishermen of jobs it needs to go. If it’s propped up by unsustainable subsidies it goes. If it’s using destructive fishing methods that result in unacceptable by-catch it goes. And if it’s so big that no stretch of ocean can sustain its hunger for fish, it goes” said Pelle.